If you follow me on Facebook you know that a few days ago I made rainbow pasta for my Life Skills (a.k.a. play therapy) kids. I thought it turned out really cool and was excited to see how the kids reacted to it. 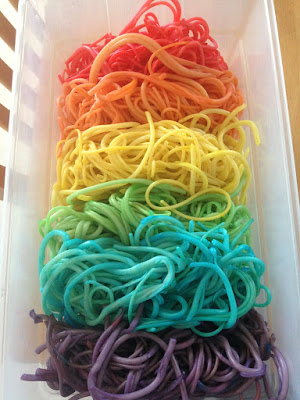 I tried it on Monday with several kids and it didn't go over very well. They would pick up a few strands, smell it, move it around in the box, and then ask to play with something else. I figured it was a bust but I kept the box of spaghetti thinking that, since I had spent so much time making it, I could at least try again with another group of kids later that week.

So, on Wednesday, I met with my second set of Life Skills kids. I pulled out the spaghetti and put a few plastic jewels in it hoping to entice the kids to at least look through it for a few minutes. I was skeptical though; at this point the box had been in the trunk of our car for a few days and the spaghetti was moist, sticky, and had the sickly-sweet smell of gluten. Not exactly what I would call enticing.

I set the box out and called in one of the kids who I thought might like it. We started with a worksheet but before I could even get going with it they had spotted the box. Within minutes they were wrist deep in the spaghetti smooshing it around and grabbing it by the fistful. They loved it! After about 10 or 15 minutes the child was ready to move on but it held their attention and helped with some of the other issues we'd been having in sessions.
I left the box out for the next child who I also thought might benefit from it and they reacted the exact same way. I tried to start with another activity but they grabbed the box of spaghetti before I could even finish with the introduction. This child was even more into sensory play than the first child. They grabbed the spaghetti, squished it, listened to how it sounded, smelled it, and then began to take it in and out of the box in piles. At that point I wished that I had a plastic mat instead of a cloth one and that the spaghetti wasn't so sticky that it basically became glued to every surface it touched but the point of the session was to allow the child to explore and process on their own. So, I let it happen (and later spent 10 minutes trying to sweep sticky spaghetti off the floor).
I don't know if the spaghetti box will be sticking around, it's basically a mushy pile of dirty, smelly spaghetti noodles now, but I think some different sensory play activities will be incorporated into sessions for sure.
Posted by Melissa at 12:26 AM No comments:

I'm really excited to announce that I have started my Life Skills groups/classes/meetings at Peris! For the last two and a half weeks I have been meeting with about 10 kids for 30-45 minutes each to help discuss problems they may be having. Some of them are very aggressive, some have trouble expressing their emotions appropriately, some are anxious and depressed, some have trouble sitting still...and I meet with them and work on these issues with them.


This is really the work that I love doing. I love seeing kids learn to empower themselves and work through their issues. The kids enjoy it and will come up to me any time I'm at the orphanage and ask when we're going to be meeting together again. There are even kids who stand at the door to our meeting room and ask me every time I poke my head out if they can come meet with me too.

I hope to share a little more about my work with the kids. For privacy purposes I can't reveal too much information about the kids that I'm working with or the problems that they're facing but I can let you know how to pray for them.
I'm still continuing to help with Character Classes and Youth Group at both Peris and Voluntari. It's nice to have a little break in between Life Skills days. Seeing five kids in just three hours is intense! Especially when they all want to dump out all the toy miniatures and throw sand and rainbow pasta around the room.

Today will be my third session with some of the kids and I'm already starting to see improvements. Pray for me and the kids as we begin to talk about some of challenges they are facing. Also, pray for the attitudes and mentalities of the orphanage staff. It's not an easy task to look after these kids every day and some of them aren't qualified to deal with the problems these kids present with. Pray for continued connections with the kids and that I will have the ability to help them build a safe space for sharing and growing.
Posted by Melissa at 12:15 AM No comments: